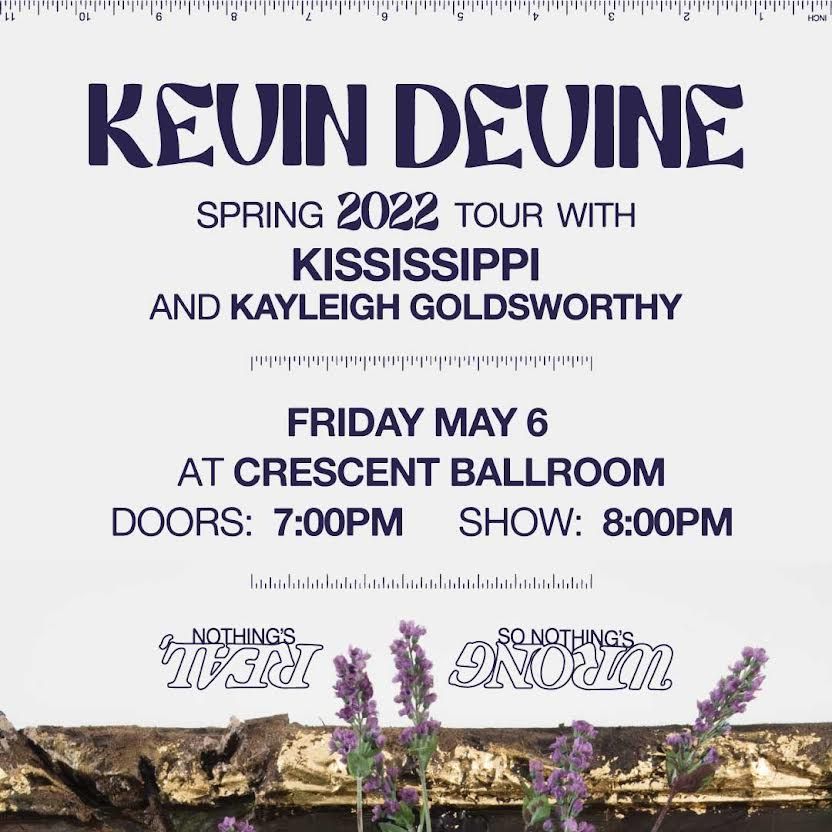 In the very first line of her 1959 novel The Haunting Of Hill House, the late author Shirley Jackson writes, “No live organism can continue for long to exist sanely under conditions of absolute reality.” That conviction is shared by musician Kevin Devine on his upcoming 10th LP Nothing’s Real, So Nothing’s Wrong, a beautiful, surreal, cinematic bedroom-rock fever dream. Its title, hewn from the chant-sung chorus of lead single “Albatross,” nods to this. In the face of incomprehensibly desperate struggles, a new spiritual paradigm is a necessity: “If you’re sinking, sing along/Nothing’s real, so nothing’s wrong,” sings Devine.

Like Jackson’s observation, it’s not an encouragement of retreat; it’s an inward solution in the name of preservation, a personal reorientation toward struggle in a collapsing landscape riddled with failed systems and vacant coping mechanisms that breed malignant internalizations.

“Part of what’s so scary about all of this stuff happening outside of us is so much of it feels so surreal and cynical,” says Devine. “We’ve invested in a version of reality that is almost so perverse that it can’t be real. Trying to find a solution to that almost involved seeing the thing as it is and invalidating it to yourself: it’s not that I’m poor, it’s that capitalism is fucking broken and rapacious. It’s not that I’m not a real man, it’s that masculinity is broken. It’s not that I’m not strong because I’m not violent, it’s that militarism has infected everything we look at.”

This is the central thesis linking the record’s 11 tracks, which drift between orchestral acoustic indie, lo-fi psych-folk, and melodic guitar pop. “They’re all excavating a particular brand of how to operate in a crisis, spiritual and familial and cultural,” explains Devine. “Rather than a spiritual bypass that tells me I’m being taken care of by some invisible architect, it’s like, ‘Everything is exactly as it is and a lot of what I invest in actually isn’t real and doesn’t need to be invested in.’ Nothing’s Real, So Nothing’s Wrong might be a little pithy, but how do I get through today? Sometimes that’s the best answer.

“I see it as a kind of stepping outside and taking some sort of virtual scalpel and carving a safe space for yourself, not to exist in denial but in a kind of re-enfranchised opposition.”

Devine wrote most of the record’s songs between January 2019 and March 2020, working remotely with collaborator Chris Bracco. Drums for the record were cut in studio, but otherwise Devine and Bracco recorded in their homes, with Devine using a four-channel mixer to record guitars. With no strict timelines, the duo explored and applied extra-tonal structural features, experimenting with different synths, sub-bass frequencies, sound effects, and found sound, like bird songs or street proselytizers or Devine’s daughter recounting a dream she had.

While releases like 2016’s Instigator embraced what Devine describes as vertical expressions of dynamics, like the “spiky, power-pop, loud-quiet, Nirvana-Pixies thing,” this collection expresses itself theatrically, in broad, horizontal textures and palettes. Devine and Bracco were influenced in particular by the Flaming Lips’ Soft Bulletin. “Flaming Lips were like, ‘What if we made sweet Beatles songs then made them as fucked up as possible?’” says Devine. “There’s a little bit of that spirit that animates this too.”