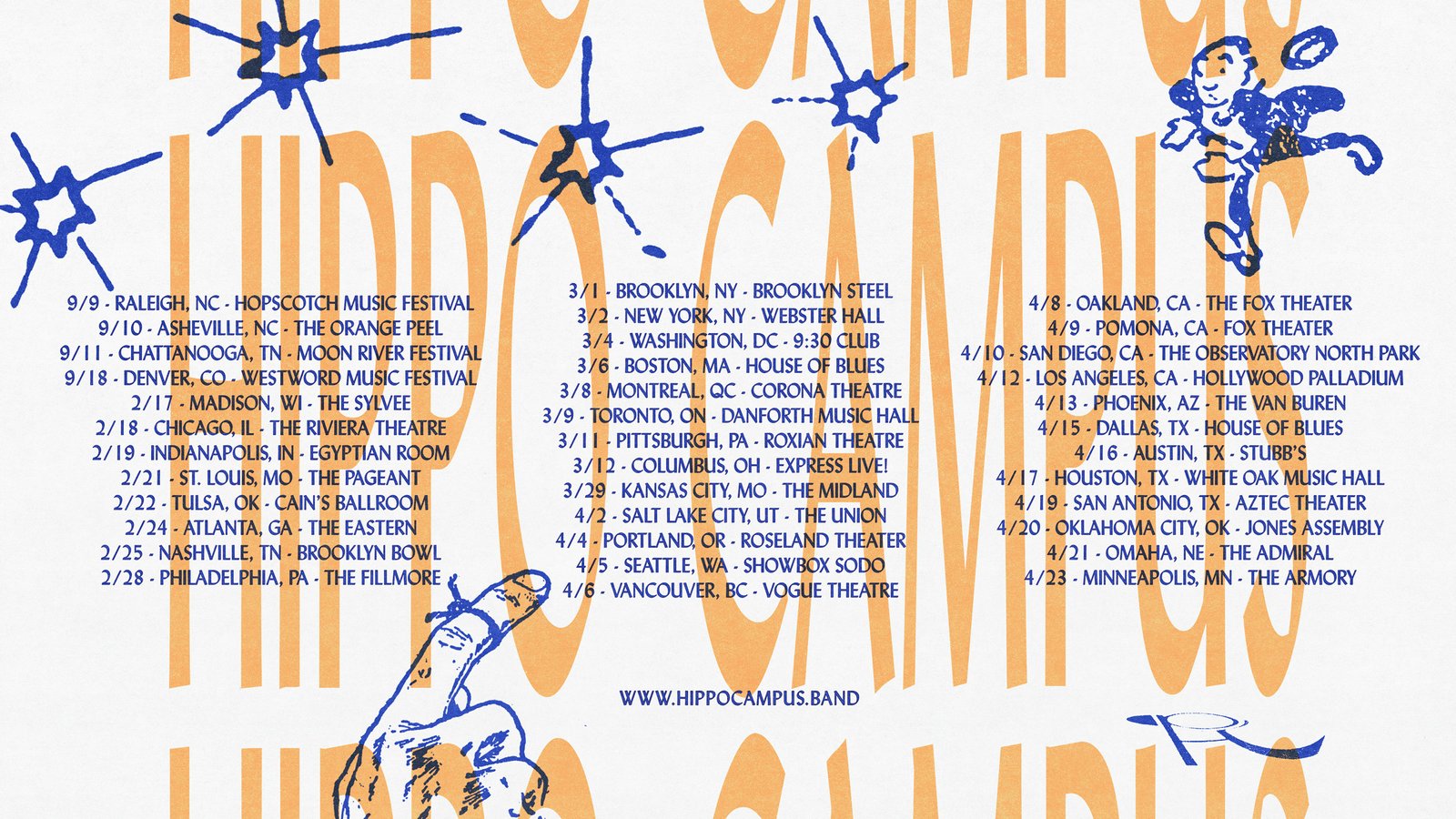 Good Dog, Bad Dream is a collection of songs that came together with ease, and without pressure — a wildly different experience than the typical Hippo Campus recording process. Hippo Campus — made up of vocalist/guitarists Jake Luppen and Nathan Stocker, drummer Whistler Allen, bassist Zach Sutton, and trumpeter DeCarlo Jackson — assembled Good Dog, Bad Dream with a genuine sense of freedom and enjoyment. It’s also the first music that the band has recorded in their new Minneapolis studio space.

“There’s a sense of ownership on this record,” Stocker explains. “I think our studio lent itself to that — someplace where we can actually make it our own. That definitely goes hand-in-hand with the music — that this is the first music we’ve produced for ourselves.”

Since the band’s wunderkind inception as high school friends back in 2013, the five-piece has continued to ascend. Hippo Campus’ catalog has gone on to amass over half a billion streams. Their catalog has also climbed the charts at radio with extensive support from Alt Nation, KCRW, WXPN, KEXP, and multiple #1 Alternative specialty singles. Their live shows prompted the BBC to proclaim them to be “one of the best bands in the United States.” They’ve earned mainstage slots at festivals including Bonnaroo, Lollapalooza, Governors Ball, Reading and Leeds and more. Their dedicated fanbase continues to grow; on their last tour before the pandemic they sold over 100,000 tickets in the US alone including sold-out shows in over a dozen major markets including New York’s Terminal 5, Los Angeles’ NOVO, two nights at Seattle’s The Neptune, and two nights at Minneapolis’ Palace, among others.

“Coming back to this EP, it was almost as if we weren’t making a Hippo Campus record,” Allen says. “It happened naturally, like we just showed up without talking about it. There was a subconscious thing of: we were making music and it felt like the first time in a while that we were making music just to make music.”

“Deepfake” deals with that industry disillusionment most explicitly; originally written for Stocker’s brotherkenzie solo project, it was refracted and rewritten by the Hippo members as a collaborative experience. But opener “Bad Dream Baby,” skews even more personal, with its weirdo, punk energy and distorted Celtic-esque guitar riff; it plays out like an electrified fever dream. In under three minutes it churns through Luppen’s childhood dog being put down, the memories it brings up of his parents’ messy divorce, a complex relationship with his father, his mother’s Mormonism, and the anxiety he felt watching the Britney Spears doc. It unfurls with a borderline-manic energy, a whirlwind of emotion.

“Sex Tape,” written about a character on the fringe of a friend group, was written off-the-cuff in the studio — laced with imagery of the band’s experience cruising around Minnesota in the summer, as Luppen considers the strangeness of seeing a path he could’ve gone down played out by someone else. The looping, hypnotic “Where to Now,” inspired by The National and written by Stocker, feels stuck. It unfolds while trapped physically and mentally, both in quarantine at his parents’ house and in an ongoing disagreement with somebody else, encapsulating the frustration with the cyclical nature of feeling like everything is recycled reality.

As a whole, Good Dog, Bad Dream was catalyzed by its chaotic closer, “Mojo Jojo.” The only song on the EP co-produced by Baby Boys’ Caleb Hinz, the track was a bizarre outlier within the catalog. But Hippo Campus felt like the song suddenly provided context for an EP: strange and unpredictable and genre-less, weaving together a bunch of disparate pieces into something that felt organically whole and human. To them, it blew open the idea of what Hippo Campus could be and offered an opportunity to wipe the slate clean.

And in that, there’s a sense of elation — translated here via a lot of screaming — which reaches back to the early days of Hippo Campus, when they’d just go for it without really worrying about hurting vocal cords. There’s also a galvanizing live band element on these songs. Here, Hippo Campus intentionally steered away from the sonics of Bambi, their “depression album.” They wanted to come away with something that was referential to their earlier catalog, but with a contemporary take on it that made sense with who they are today.

“This kind of energy has always existed in the band,” Luppen says. “The language we use on this EP is the language we use to talk to each other. It’s who we are as individuals, and it’s something we never really delved into in songwriting before. There’s something about these songs that is really explicitly human.”

Good Dog, Bad Dream is tragic, but it’s funny. It’s intense and honest, confident and vulnerable and strange. It’s stasis, a homecoming, Minnesota summers with the windows down and “The Boys are Back in Town” on the radio and the haunts you always used to go to with your friends. It’s disillusioned and manic and anxious, but it’s also catharsis, the joy of making music with your friends in a studio and feeling like, somehow, anything is possible. It’s a celebration of brotherhood, and the “all for one, one for all” mentality that has permeated Hippo Campus’ work since the very beginning.