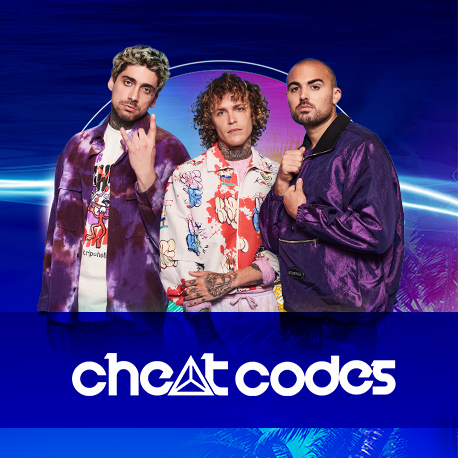 What do you get when you combine three genre-defiant, dynamic, and dashing mavericks with myriad musical talents who know how to soundtrack and start a party? Well, those wild personalities—KEVI, Trevor Dahl, and Matthew Russell—power Cheat Codes.

Simultaneously trafficking in electronic, pop, hip-hop, and alternative at the same high speed, the Los Angeles trio remain an inescapable force throughout popular culture. As of 2020, their total stream tally eclipses a staggering 6 billion plays. With 4 billion streams on Spotify alone, they average 15 million monthly listeners on the platform, making them one of the “Top 200 Most Listened To Artists in the World.”

Maintaining a prolific pace, they’ve steadily amassed a diverse discography, including the platinum Pop Radio Top 5 smash “No Promises” [feat. Demi Lovato], the gold-certified “Feels Great” [feat. Fetty Wap & CVBZ], and gold-selling breakout “SEX” with Kriss Kross Amsterdam. Speaking to their international impact, “Only You” [feat. Little Mix] soared to #1 on Pop Radio in the UK, while they received dozens of platinum certifications in 20 countries. Not to mention, Liam Payne, Kim Petras, and Sofía Reyes all jumped at the chance to collaborate and remixes for Ed Sheeran and Sam Smith. Igniting clubs worldwide, their 2019 level 2 EP yielded the #1 Dance Radio hit “Who’s Got Your Love” [feat. Daniel Blume] in addition to “Ferrari” [feat. Afrojack] and “Be The One” [feat. Kaskade]. Acclaimed by Rolling Stone, Paper, Time, Billboard, and more, the musicians have shut down The Tonight Show Starring Jimmy Fallon and Jimmy Kimmel LIVE! with stunning and show-stopping performances.