It was an amazing weekend in Chicago and festival-goers still arrived early for one last day of Riot Fest. Atlas’ day started a little later, but was no less jam packed as we sent off our favorite event of the year.

The most memorable part of Riot Fest is its commitment to stacking the lineup with acts from every genre- and the hottest part of the day found us and hundreds of fans sweating it out with Coolio. The hip hop legend sauntered out in a matching green set and delivered the hits with a slightly milder aggression than his younger years. Paying tribute to his musical counterparts who have passed on, “C U When U Get There” had the crowd moving in unison. The set was a nice departure from our rock-heavy weekend and memorable for fans of all types of music.

Hip hop reigned supreme on this last day, as not only Coolio played the Rise Stage, but he was also joined by headliner and one of the godfathers of gangsta rap, Ice Cube. The menacing rapper prowled the stage under eerie red lights, delivering some of his best songs to a field full of fans. Naturally he threw “Straight Outta Compton” into the mix and summed up everyone’s Riot Fest mood on the closer “It Was a Good Day”.

Another weekend standout was the boys in Weathers, playing in direct sunlight on one of the festival’s smaller stages. That didn’t bother this quartet, however, as they took all their energy and fed it to an adoring crowd. The band also pushed through technical difficulties for a stellar late-afternoon performance.

The latter part of our final day had us running, as there were so many acts that were not to be missed. Our hometown favorites in The Maine provided direct support for the night’s headliners and drew an audience that made Arizona proud. Singer John O’Callaghan is always goofy and fun onstage, drawing the energy out of his audiences for top tier sets. The band was joined later by Charlotte Sands for their recent hit “Loved You a Little” before closing out with “Black Butterflies and Deja Vu”.

We may have just witnessed the returns of Midtown and The Academy Is, but they weren’t done melting faces in Chicago. The two bands played the final sets of the day, with TAI headlining across from the behemoth that is Nine Inch Nails. Midtown jokingly referenced the previous night’s set, saying that it would be the same since they only rehearsed a certain number of songs. No matter what, the fans showed up and showed out to see their favorites back onstage.

The Academy Is also played the same set as the previous night, but that didn’t make it any less special. For those who were unable to attend, the anticipation for “Snakes on a Plane” was palpable- sadly the set was cut short and the people were denied their moment (a fact that was lamented in online circles for days afterward).

Regardless of the ending, Riot Fest 2022 was undoubtedly another excellent entry in the festival’s long history and an experience we’re eager to repeat for years to come.

Check out all the photos from day three!

Show Review: Chicago took a late night trip down memory lane with The Academy Is and Midtown 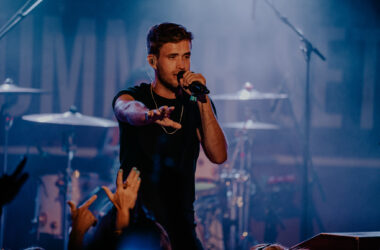