With the more recent boom of Korean music in popular culture and the success of international tours, more and more groups are making the trip west for limited run visits to the United States. March 11 saw ONEUS fill the Marquee Theatre with dedicated fans for a high energy evening towards the end of their Blood Moon Tour.

An eager audience flew through the doors of the Tempe venue to secure the best possible views for the six piece group, who- after a short delay- began their set with a vengeance. Since their debut in 2019, ONEUS has grown and cultivated a devoted fan base with an impressive discography of up-tempo tracks and charming stage presence.

Emerging in elaborate white outfits and bathed in a cascade of warm lights, ONEUS jumped right into “Come Back Home” and the rock version of “Valkyrie” before taking a breather for their first ment of the night. The room was utterly enraptured by the six men onstage as they addressed the crowd in both English and Korean to express their joy at being on tour in the US.

With over 20 songs on the setlist, there was a favorite moment for every fan in the room and the screams reached deafening volumes for “Shut Up Crazy Hot”, “Youth” and “Luna”. In between the stunning dance arrangements, the group ventured to the fringes of the stage, waving finger hearts at the already overwhelmed audience. The group also broke off into subunits for several heart-stopping dance covers before seamlessly transitioning back into their original material.

We’ve expressed it before, but the energy at KPOP shows is unlike nearly any other concert experience. ONEUS may be new to the scene, but the fans’ devotion is rock solid and the group rewards every attendee with every ounce of effort and talent they have to give. Their addresses to the crowd were heartfelt and genuinely goofy- with Seoho dropping his mic and becoming endearingly embarrassed for the remainder of the ment, it’s just a reminder that these guys absolutely love what they get to do.

Over two hours later, ONEUS brought the night to a close with a beautifully uplifting version of “Life is Beautiful” and the heavy hitting and relentlessly catchy “BBUSYEO”. Voices were lost, lightsticks and signs were waved and undying love was professed over the course of an evening Tempe is still reeling from. Since Arizona was such a successful stop, we’re sure to see more of ONEUS in the very near future.

Check out all the photos from an incredible night! 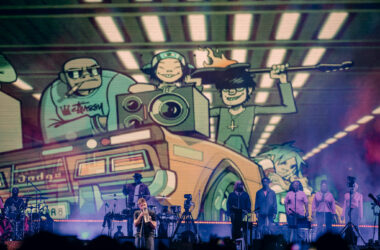