Fans arrived at downtown Phoenix’s Futuro Coffee on Saturday night expecting dancing, good vibes and the typical July heat. Arizona weather- in all its summertime unpredictability- instead dropped a massive dust storm, forcing the parking lot gig into the cramped coffee shop space for one hell of a party.

The Tucson group embodied “the show must go on” mentality and made the best of a messy situation. Trendy, well-dressed fans stacked themselves chaotically in front of the hastily relocated band, ready to dance the night away.

Los Esplifs mesh a plethora of sounds, including Cumbia, Fania and more, to get their crowds on their feet. The band played new tracks from their April album, Estraik Back, along with old favorites and their diehard fans shouted every word.

Singers Saul Millian and Caleb Michel sing primarily in Spanish, but no language barrier could stop the connection the room had with the music. Even the storm continued to move past Phoenix as the show went on, leaving behind sweaty, exhilarated listeners, some of whom stopped on the sidewalk outside to dance along.

Sure, we probably broke fire code, but you simply can’t stop the good times when they’re rolling. Los Esplifs made the most of their journey to Phoenix and we can’t wait for the next time they venture back. 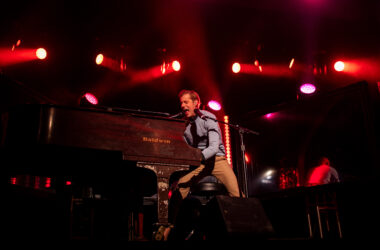 Hear me out: Andrew McMahon is the little black dress of the music world. We’ve seen many iterations…