Arizona hard rockers DED are back with a vengeance, dropping their video for “A Mannequin Idol (Lullaby)” today. Singer Joe Cotela snarls and spits his distaste for the vapid and the fake, while the rest of the band provides a brutal instrumentation. The video was directed by Marc Klasfeld and elevates the band’s visuals to ferocious new heights. 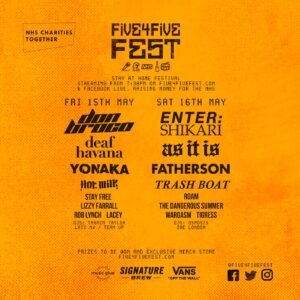 A brand new online festival is launching on May 15-16 with the Five4Five Fest! Headlined by UK heavyweights Don Broco and Enter Shikari, the festival has also added a slew of stellar acts for a weekend of epic remote performances. Deaf Havana, The Dangerous Summer, As It Is, Tigress and more will be streaming from across the world in an effort to raise money for NHS Charities Together. Fans can tune in for free while purchasing raffle tickets to win exclusive items donated by the bands. 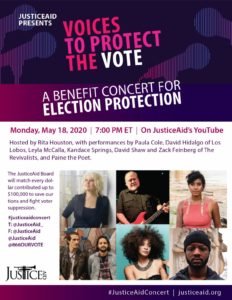 May 18 brings another new online event to fans. JusticeAid’s Voices to Protect the Vote concert aims to educate viewers about issues regarding voter engagement and voter suppression. This event is free to stream, but every dollar up to $100,000 will be matched by the JusticeAid Board and donated to support grassroots efforts to remove barriers to voting across the US.

Check out the lineup here and tune in on May 18!

New Jersey quintet Gatherers is back after a year away to announce joining the No Sleep Records family. The band has also put out their latest single, “Ad Nauseum, I Drown” with a full-length album on the way. “The song is about the facade of relevance. And where it sits on the spectrum between purposeful art and undignified bullshit. These days it often feels like we’re being smothered in the latter,” says the band about the track.

Kicking off May and Mental Health Awareness Month is Atlas favorites Love Ghost. Their latest single release explores the struggles of depression and isolation and is a perfect message of hope for fans still stuck in quarantine. “I’ll Be Fine” comes out on the heels of the satirical “Chasin’ Money and Bitches”, with both tracks showing the young band’s impressive thematic range.

Rapper and poet Watsky broke the Guinness World Record for longest consecutive freestyle rap on Friday. Clocking in at his announced goal of 33 hours, 33 minutes and 33 seconds, Watsky used this time to also raise money for Sweet Relief Musicians Fund and his touring crew. Watsky and his team raised over $143,000 dollars over the course of 33 hours, streaming the freestyle on Twitch, Facebook and YouTube while thousands of fans tuned in across the globe. He also offered prizes and rewards for each level of donations and the fans turned out in droves to help accomplish this goal.

You can watch the entire recorded stream on YouTube now!

On the heels of a our first summer without the Warped Tour, a new crop of traveling festivals…