The Rebel Lounge in downtown Phoenix only hosts 300 people and nearly everyone at Beach Goons’ sold out headliner ended up onstage by the end of the night. The Southern California three-piece was joined by Junkie for one of the rowdiest nights in the venue’s history.

Texas band Junkie provided the tour’s direct support and their opening riffs started the night’s total insanity. Fans jumped, danced, moshed and caused general chaos for their entire time onstage. The band reveled in the madness, occasionally glancing up in awe at the response to their fast and loose punk tunes.

Singer Mark Perez was a whirlwind, whipping his bleach blonde hair and rocking out alongside his bandmates. The rest of the band in turn kept the show running at the highest possible velocity, headbanging and egging on the increasingly frenetic fans.

Junkie is celebrating the release of their new album, Fast Times, playing songs like “Luv Died” and “Lisp and Lips”. Based on the screaming, most of the audience already knew the words and came prepared to give the band all they had. By the time Junkie left the stage, the crowd was doused in water and sweat and, as they finally pushed back from the stage, the shouts of items left behind found their way back to their proper owners.

Barely leaving time for the audience (and security) to catch its breath, Beach Goons came out to close out the night. Playing a unique and catchy Spanglish punk rock blend of sounds, the band has found their sweet spot and is ready to completely knock people over. The Rebel crowd was more than happy to oblige, turning right back into the churning mass of humanity from the previous set.

Beach Goons had the audience in their palm of their hand, playing tracks from their newest album, hoodratscumbags. The fans pushed even closer, with many of those in the front row ending up crouching on the stage as members of the touring band stage-dived into the crowd.

“Vatos Tristes” nearly caused a riot while “Hunny Bunnies” and “A.M.” ensured the energy levels never wavered. The band ended the evening in a haze of sweat, inviting the excitable audience onstage for a rousing punk cover of “La Bamba”.

From watching Beach Goons open a show nearly a year ago at this very venue, to headlining a sold out gig, it’s clear that this is a band that can only continue to rise to the top. And as the drenched, euphoric fans leaving the building will tell you, they’ll be around for every moment on their journey to superstardom.

A new year signals new beginnings and for Eric Nam, 2022 is the start of a fresh, independent… 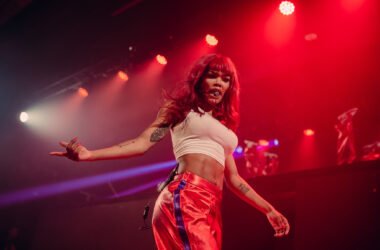 R&B queen Teyana Taylor’s final tour made a sold out stop in Arizona this week, bringing out the…