The gentlemen of Great Good Fine Ok are fairly lowkey offstage. Singer Jon Sandler and producer/multi-instrumentalist Luke Moellman could be found relaxing backstage before their show at Phoenix’s Crescent Ballroom on Wednesday.

Onstage, however, the reticent Moellman transformed into an instrumental mastermind- a wizard on the keys (and keytar!), effects and everything in between. He’s the undeniable conductor of the set, running the heartbeat of the show through his plethora of gear.

Meanwhile, Sandler commanded center stage, sparkling in his layers of sequins and sheer charisma. The crowd moved at his pleasure, a mutual expression of good vibes and admiration.

GGFO knows how to move a room and Crescent obliged wholeheartedly as fans danced with abandon for the length of the set. The band radiated positivity, running through a set that included “Easy”, “Terrified” and their collab with Before You Exit, “Find Yourself”.

Atlas sat down with GGFO before the show to talk about musical evolution, future collaborations, and what’s coming up for the dance-pop duo.

Atlas Artist Group: Can you tell us the origin story of Great Good Fine Ok?

Jon Sandler: We became friends like 7 years ago and he was the roommate of a guy I was currently playing with at the time so we became friends. Then, we decided to write a song together and we wrote our first song and it just took off in a crazy way and we started the band. It was pretty unexpected and just sort of happened.

Atlas: Your band name is so fun and unique. How did you come up with it?

Sandler: I wish it was a better story but I don’t remember how I came up with it. It just popped into my brain a long time ago and I put it in the vault of “that would be a good band name” and then when it came time to name the band, I ran it by Luke and he was sort of like “I don’t hate it”.

Atlas: How has your music evolved from the beginning of the band up to now?

Luke Moellman: Well I think at first we just had that one song and then it was like now we’re a band and we need to make other songs that sound like that song. I guess we tried to stay in the palette of specific types of synths and drum sounds and that kind of thing, and no acoustic pianos or acoustic guitars or any sort of acoustic-y kind of sound. It was all sort of synths you’d hear out of the 80s.

And then we did a bunch of stuff in that kind of palette and then got bored of it after awhile and kind of started to expand. I guess the acoustic piano was kind of like the first thing that started bringing it into that world and we started adding more acoustic guitars and messing around with stuff like that.

Atlas: What inspires you, both creatively and personally?

Sandler: Since we both do the different roles in the band- he’s like the producer and mixer and engineer and I’m like the lyric writer- I think our processes are very very different. Mine are very emotionally based and very personal and a lot of it stems from like heartbreak or love or things like that. I’ll have a concept that I want to write about and that’s how I’m kind of inspired, by like the things that I need to get out.

Moellman: I think that when I’m making music for us, it’s definitely coming from whatever emotional state I’m in, but I obviously don’t have to translate that into any kind of lyrics and it’s interesting how it just comes out.

Sandler: Sometimes he’ll make the music first and then his music will inspire me in a certain way. It’s either he’ll come up with the music and send it to me or I’ll come up with a lyrical idea and show it to him and we’ll go back and forth. A lot of times, what the other person comes up with inspires what the other person’s going to do, so it’s kind of cool in that way.

Atlas: What artists/music did you listen to growing up that influenced your sound as a band?

Moellman: My mom was always playing classical music and she’s a flute teacher so there were always flute students over at the house. My dad listened to classic rock radio mostly. I guess the biggest influence to me, rather than listening to a specific type of music, was learning to play instruments. I started playing piano when I was like 5 and I started playing percussion in school band when I was in 5th grade and I started messing around with making music on a computer sometime in like junior high school. Eventually all those worlds just sort of collided to where I am now.

Atlas: You’ve done several remixes in the past. Do you have a favorite remix you’ve done and is there a dream remix you’d like to work on?

Moellman: That first St. Lucia one we did was pretty sweet.

Sandler: That was cool and I sang at the end of it. Most of the time, Luke kind of just does it but at the very beginning, I sang on some of the ones we were doing and I sang this really high new- like I wrote a new part over it- and then we met them at a show and she thought it was a girl.

Atlas: Are there any collaborations coming up for you, and is there anyone you’re dying to work with?

Sandler: I mean, we loved doing collaborations on the EP we’re releasing at the end of the month. We’re always open to collaborate and we love when they come together really organically. We can’t force it- we’re huge fans of so many artists and I can think of 50 people that it would be great to collaborate with but it only works if those people also want to collaborate with us. There’s going to be more collaborations, that’s for sure, but it’s exciting that we don’t know who!

Atlas: What’s coming up next for GGFO?

Sandler: We have some things coming up- we’re playing some shows in China in August so we’re excited about that. And releasing this EP is exciting. I’m excited to just start working on new songs because it’s taken us a long time to finish the songs for this EP and I feel like we’ve been working on them forever and so we have all these new ideas and all these new things I want to say.

Atlas: Does GGFO have a “master plan”?

Moellman: Domination of the entire galaxy.

Sandler: I think you’re only looking to be disappointed if you have a master plan. In my mind, it’s like keep doing what we love which is writing songs and making cool things and touring and see where it goes. 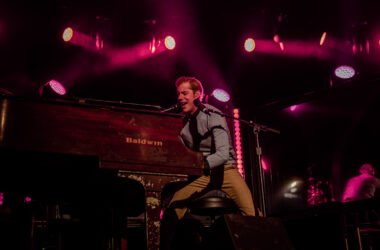 Andrew McMahon’s career is already the stuff of legends- from multiple eras and musical projects, a cancer diagnosis,…