If Tempe Marketplace had a roof, The Damned Things would have torn it off. The hard rock supergroup roared into Arizona for their headlining tour stop last week, bringing some energetic friends along for the ride.

He is Legend started rocking before the sun set and those already in attendance were immediately drawn to the stage. Frontman Schuylar Croom was on point, fully engaging with the fans in the front who were eager to sing the words back at the band. As this was the penultimate night of tour, He is Legend brought their best to close things out strong.

Not ones to shy away from the flamboyant and theatrical, Crobot took the direct support slot and raised the bar while the audience raised their beer. Singer Brandon Yeagley was wildly expressive, playing with the audience throughout the set. The rest of the band was more than content to let the magnetic frontman take center stage in his jeweled vest. The band played a solid selection from their catalog, making the crowd laugh and cheer for a teasing intro of the Ghostbusters theme song into power number “The Necromancer”. The end of the set found Yeagley leapfrogging onto his guitarist’s shoulders, a move reminiscent of Foxy Shazam’s Eric Nally. Crobot won the total approval of the audience, many of whom seemed to have turned out for them alone.

When The Damned Things perform, everything else falls away. The recently-reunited supergroup opened their set with the title track from their last pre-hiatus record, Ironiclast, and the night was a whirlwind from that moment. Singer Keith Buckley (Every Time I Die), guitarist Joe Trohman and drummer Andy Hurley (Fall Out Boy), guitarist Scott Ian (Anthrax) and bassist Dan Andriano (Alkaline Trio) are some of the biggest names in modern rock and their similarities have created a truly epic sound.

The one-two punch of “Omen” into “Let Me Be (Your Girl)” had all the fans shouting along while Buckley paced the monitors at the front of the stage, reaching into the crowd as they packed even closer to the barricade. This self-professed “unique situation” for the band turned into an amazing evening. Fans were visibly awed to be watching so many famous faces rock the same stage and the music spoke for itself.

“A Great Reckoning” was the turning point of the evening, with the energy reaching a fever pitch (for a crowd of metalheads). One small cluster even started the mosh pit, leaving the younger audience members (all decked out in FOB gear) confused but still having fun.

The band closed the night with “Graverobber” and “We’ve Got a Situation Here”, squeaking past curfew to end in a blast of sound. Watching a band that is clearly already larger than life play Tempe Marketplace was a treat like no other and the fans gave that gratitude directly to the grateful quintet. With their reunion and new album still fresh, The Damned Things promised to return and we know they’ll be playing a stage that will definitely showcase their massive growth and sound in a project that’s all their own. 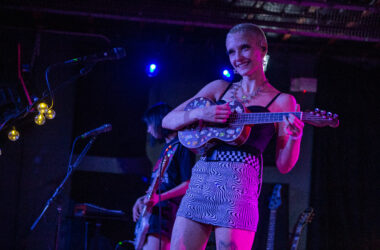 The Rebel Lounge was sold out on Sunday for Chloe Moriondo and, after seeing her performance, it was…