Arizona-based Four Peaks Brewing Co. turned 21 in style with a grandiose party featuring Katastro and The All-American Rejects, driving a sell out crowd to brave the cold at Phoenix Rising Stadium.

The festivities kicked off mid-afternoon and the local boys in Katastro hit the stage later in the evening. Energetic and mega-talented, Katastro’s blend of hip hop and reggae kept the crowd moving (both from the catchy rhythms and the need to stay warm).

Katastro has quite a catalog under their belt and they played plenty of older tunes mixed in with songs from their newest album. Fueled by plenty of Four Peaks beer, the audience sang along and showed their hometown love.

No pseudo-festival set would be complete without a carefully-chosen cover and Katastro surprised with their choice of “Redbone” by Childish Gambino.

“Where’s all the weed smokers at tonight?” singer Andy Chaves asked in typical laid-back fashion (screams of affirmation were backed by a warning against smoking in the venue for fear of getting kicked out before the headliner played). Katastro is consistently nothing but chill vibes against completely insane instrumentation- in short, those guys are having the time of their lives rocking out to music that makes them happy. The band played for over an hour but the crowd didn’t want them to go and they chanted for an encore long after they’d left the stage.

The All-American Rejects resurfaced better than ever for this party performance. Opening with a frenetic rendition of “Swing Swing”, the band took the audience right back to the early 2000s and everyone (including and especially myself) was thriving. Singer Tyson Ritter promised the fans plenty of songs from 2006, then cheekily started up “Beekeeper’s Daughter”.

The audience was delighted with the band’s antics onstage, and their singing along with “I Wanna” and “Kids in the Street” threatened to drown out the band. Guitarists Nick Wheeler and Mike Kennerty balanced each other with Wheeler’s reserved solos and Kennerty’s spastic energy and constant motion, returning to the mic for harmonizing with Ritter.

Ritter is a born entertainer and he’s only gotten weirder onstage over the years. He spoke in outlandish accents, teased the fans in the front row, tossed his hair and his body all over the stage and even invited an exuberant fan to join them for a song. He called out dudes in the crowd (you’re never too cool to dance at a show) and danced with the fans on the barricade.

“Dirty Little Secret” took us all right back to sophomore year before the band slowed things down for a heartfelt performance of “There’s a Place”, which Ritter called the best lyrics he’d written in the latter part of his career.

“Let’s raise our glasses to those we lost and those we might see one day again,” he toasted, concluding the quiet interlude with a singalong to “It Ends Tonight”.

The end of the set was prefaced by Ritter’s introspective musings on the state of rock and roll music in the modern era.

He aptly put, “It used to be sex, drugs and rock and roll and now it’s just Instagram and drugs I guess.” They decided to inject some sex back into music, playing the sensual and teasing “Sweat” for the now quite drunk audience, who ate it up and begged for more.

The Rejects closed their set with “Move Along”, one of their biggest hits, with a Pixies “Where Is My Mind” intro. Ritter then changed into an iridescent Four Peaks shirt, bounding back out to end the event with “Gives You Hell”.

Somehow in the years they’ve been mostly dormant, The All-American Rejects have managed to ascend to the next level. Their performance was equal parts sassy and sexy and the band has really evolved their dynamic to highlight every member throughout the set. Hopefully they’ll decide to turn this resurgence into more new music and be back on our stages very soon. 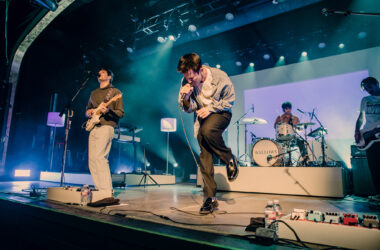 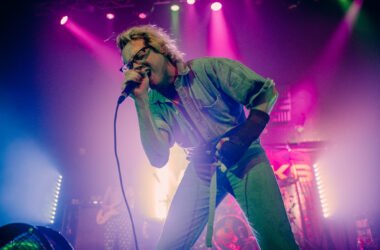 The already blistering Arizona summer heat infiltrated the Nile Theater on Thursday, steaming up the venue for a…