For nearly 20 years, Thirty Seconds to Mars has been one of the biggest rock acts in the world. With the final date of the massive Monolith Tour, they reminded us why that continues to be the case.

The night kicked off with Welshly Arms and K.Flay in the opening slots. Welshly is all raucous energy, getting the sparse crowd moving to their brand of rock and roll, despite the heat and early start time. Singer Sam Getz owned the Ak-Chin Pavilion stage, working the catwalk to solo with his guitar hoisted behind his head.

Hip hop artist K.Flay sang us to sunset. All disjointed dancing and grit, she barreled her way through hits like “High Enough,” “Blood in the Cut” and the Robert DeLong collab “Favorite Color is Blue.” She stomped her way around the stage as the venue filled up, keeping the audience riveted for the duration of her set.

Things really got going with the arrival of proud Ohio group Walk the Moon. Singer Nick Petricca wasted no time in starting the dance party, jumping from “One Foot” to fan favorite “Lisa Baby.”

At this point, everyone from the pit to the lawn was on their feet, dancing and screaming the words, especially when the band brought out “Shut Up and Dance” in the middle of their set. Walk the Moon headlined Phoenix earlier this year and Sunday’s direct support slot only proved that this is a band that holds nothing back, regardless of their place in the lineup.

The venue came alive as the set went on and Walk the Moon made the most of their elaborate light setup. As always, the brightest moment happened during equality anthem “Different Colors,” the whole place lighting up in all the colors of the rainbow. Petricca, bassist Kevin Ray, guitarist Eli Maiman and drummer Sean Waugaman looked overjoyed to be onstage and it showed in their performance. They closed with the heavy rocking “Headphones” and classic “Anna Sun.”

As the large video screens lowered on to the stage, the crowd’s volume rose to fever pitch to welcome Thirty Seconds to Mars. These days, the live show is a little sparse, with only frontman Jared Leto and drummer Shannon Leto visible to the audience. Multi-talented Steve Aiello backs them up on keys and guitar, while the production has all eyes on Jared.

Wearing a floral green, floor length kimono and metallic red high tops, Jared Leto is a presence even when he’s not belting his signature vocals to the band’s biggest hits. He circled the wide-open stage restlessly, often pausing to address the crowd, extend a bridge or invite scores of fans onstage for selfies and dancing.

One lucky fan won the opportunity to play “This Is War” on guitar with his heroes. Shortly after found the audience in tears as another giddy fan successfully proposed to his stunned girlfriend as Jared screamed “She said yes!”

The entire set was a massive spectacle with Jared front and center. Fans had an open invite to crash the stage and even Walk the Moon jumped out in their own floral outfits to dance to “Rescue Me.” They also switched things up to include “From Yesterday” to the delight of longtime fans.

Towards the end, the spotlight fell on Shannon for a special performance of “The Remedy.” He’s clearly not as used to center stage, but impressed everyone by tapping into the emotional depth of the song. Jared also made sure to bring Nick Petricca (Walk the Moon) onstage for “Great Wide Open” and K. Flay for an amazing duet for “Walk on Water.”

It’s so difficult to accurately put a Thirty Seconds to Mars show into words. One thing is absolutely certain- these guys are rockstars, they know it and they bask in it. Fans of all ages waved signs, and raised their arms in unison for balloons and confetti all night long. This stacked lineup had an entire venue exhausted from singing and dancing and was a properly epic end to this huge tour.

Story and Photos by Olivia Khiel

5 Independent Festivals on Your Radar This Fall 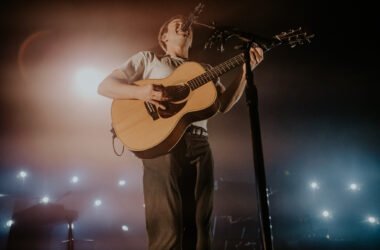