“I Don’t Know How but They Found Me, it ain’t no secret baby- we just don’t advertise!”

Leaving the biggest rock bands in the world can’t be an easy decision, but Dallon Weekes (ex-Panic! At the Disco) and his stagemate Ryan Seaman (ex-Falling in Reverse) managed to subvert expectations when they went all in on I Don’t Know How But They Found Me (or IDK How to fans).

Their headlining tour visited 191 Toole in Tucson, packing the art space with the loudest crowd I’ve ever seen on a Monday night.

Phoenix rockers Sunday at Noon kicked things off with a rousing set, making sure the fans were already dancing and ready for IDK How. Channeling their best 80’s glam hair pop vibe, the four-piece jammed their way through new music (“Thunder” and “Honey”) as well as a killer cover of The Struts’ “Kiss This.”

Taking the stage in floral and sequins, IDK How is unashamedly flamboyant, never quite taking themselves seriously. The undercurrent of this band is biting sarcasm and wit but the quality of the music speaks for itself.

Opening with “Choke,” their most recent single, IDK jumped into a set with a much bigger sound than the two gentlemen on stage. Weekes strummed a ferocious bassline, aided by Seaman on drums and the plethora of instrumental tracks created by the duo.

Weekes alternated between serious and silly, introducing himself as Dallon “the ultimate bad boy” Weekes and Ryan “don’t call me Papa Smurf” Seaman (in reference to the latter’s electric blue hair). In a moment of gravity, however, Weekes also expressed his gratitude for the support this project has gotten, saying it’s the band he’s wanted to start for years.

Undoubtedly the most memorable moment of the evening came in IDK How’s choice of cover song(s). Jumping into “Over At the Frankenstein Place” from the Rocky Horror Picture Show, Weekes and Seaman made this cult classic modern and fresh (especially to an audience that wasn’t born when the film was released). They also brought a young fan onstage to sing the chorus for a sweet interlude. They also broke into parts of “Just a Girl” by No Doubt and the iconic chorus of “I Want You to Want Me” by Cheap Trick.

Weekes and Seaman used to be in a band called The Brobecks and they dusted off “Visitation of a Ghost” and “A Letter,” to the absolute delight of the crowd.

The energy levels never wavered and it’s clear that Weekes and Seaman’s gamble on this project is paying off. Without a record, a label or any kind of publicizing, this duo has already graced the cover of Rocksound magazine and sold out headlining shows around the country. While Tucson may not have sold out, the screams from the fans are indicative of everything to come for IDK How.

They closed the night with “Modern Day Cain” and then snuck into the audience for an a capella encore of “Nobody Likes the Opening Band,” a tongue-in-cheek tune they used to poke fun at Sunday at Noon. “They all need haircuts,” said Weekes with a cheeky grin.

The evening was full of hype and every fan left the show smiling through the sweat they worked up at one of the most fun shows I’ve attended in awhile. Don’t sleep on I Don’t Know How But They Found Me- despite that lack of advertising, they’re going to be huge. 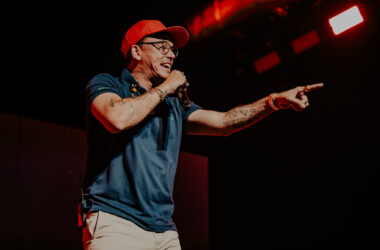 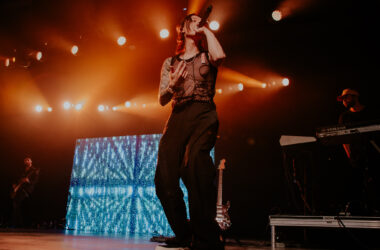